Words are our Best Weapon Against the Lies of History (Truth in the Root of the Word). 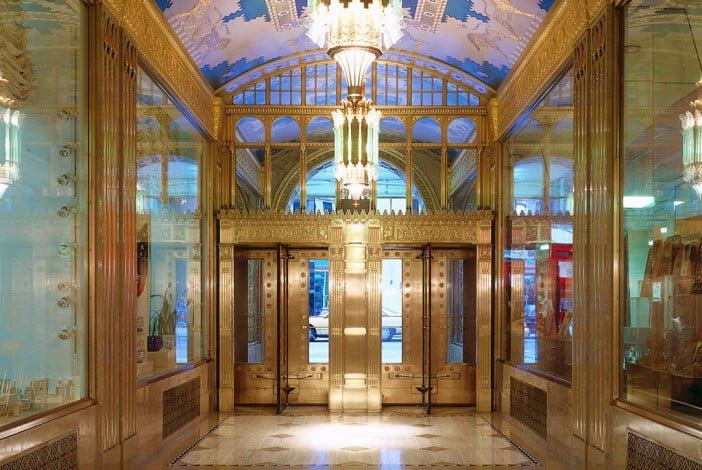 The 38-story Fred F. French building was the tallest structure along Fifth Avenue when it was completed in 1927. The office building, developed by Tudor City builder Frederick Fillmore French, underwent a restoration in the 1990s and was soon after added to the National Register of Historic Places.

It was erected in 1927 with a striking art deco facade contributing significantly to the international reputation of Fifth Avenue.[1] The building measures approximately 430,000 rentable square feet and is currently owned by The Feil Organization. It is used primarily as an office building and also houses classrooms of Pace University. The building is one of the better known projects of the real estate developer Frederick Fillmore French. The lead architects were H. Douglas Ives[2] and Sloan & Robertson. The tallest building on Fifth Avenue when completed, by the 1990s underwent a complete restoration, subsequently earning the Building Owners and Managers Association 1994/1995 Historic Building of the Year Award. The National Register of Historic Places listed the building in January 2004.

Fred F. French , He was born in Manhattan, New York City on October 14, 1883. His middle name, Fillmore, was an ode to his distant relative, President Millard Fillmore.[1] He grew up in the Bronx and attended the Horace Mann School.

French was married to Cordelia W. French, with whom he had:[7] 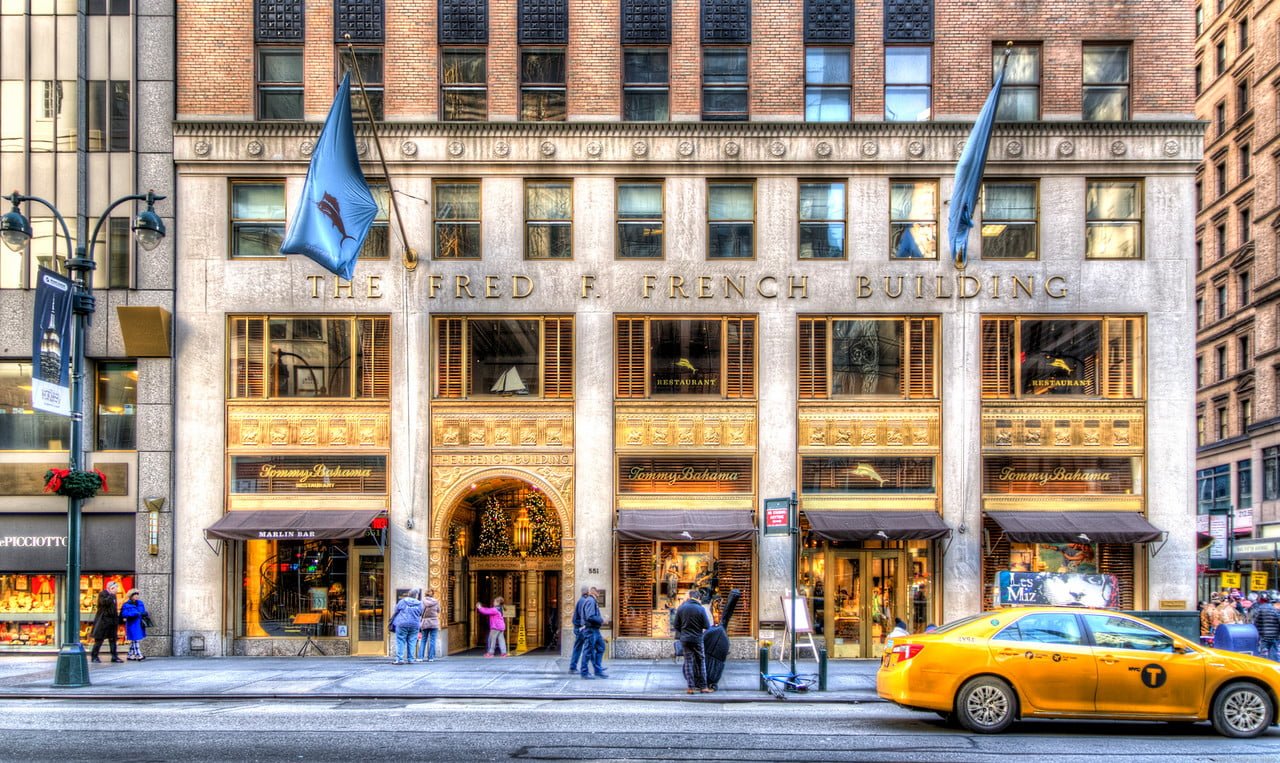 A few blocks away is Grand Central Station

The first was Grand Central Depot, built by railroad tycoon Cornelius Vanderbilt and opened in 1871, which served as a hub for a number of railroad lines entering Manhattan. The complex, which stretched in an “L” shape along 42nd Street and what is now Vanderbilt Avenue included storage yards and a balloon shed where passengers boarded and departed trains. The railroads quickly outgrew the Depot, and in 1899 it was demolished and replaced with a far larger building, six stories high, which was named Grand Central Station. It wasn’t until 1903 that construction began on the current building, a project that took 10 years to complete.

By Carter B. Horsley

The best of three similar slab skyscrapers on the avenue in the mid-40’s, this 38-story tower was the flagship of one of the city’s most important developers who created the Tudor City residential complex spanning 42nd Street at First Avenue and who envisioned an even larger project to redevelop 250 acres of Lower East Side tenements.

Top of the Building

Although deserved praised for its rich and intriguing decoration, this setback skyscraper is perhaps most interesting for the color of its masonry above its limestone and bronze base: a warm orange, highlighted by deep red and black trim at its setbacks. The orange hints fiery sunsets, which, of course, are emblazoned on its large friezes on the north and south facades of its flat crown, as shown above. The color is quite appealing, but surprisingly has been rarely imitated and has survived the city’s grit well.

According to Robert A. M. Stern, Gregory Gilmartin and Thomas Mellins in their book, “New York 1930 Architecture and Urbanism Between the Two World Wars,” published by Rizzoli in 1987, the building was “a collaborative design between H. Douglas Ives (of the French Company’s in-house architecture department) and John Sloan of Sloan & Robertson, who embellished its innovative mass with a novel ornamental program.”

“The building’s astylar detailed complemented its three-dimensional complexity. Possibly the first skyscraper to have a flat roof, its straightforward water tank enclosure blazed with vividly polychromed faience panels that terminated the shaft without resorting to historical motifs. Ives described the iconography of the panels:

“From the beginnings of architecture down through the Roman, Romanesque and Gothic periods the use for which buildings were intended was expressed by symbols, and so in the French Building we have endeavored in the panels of the top of the tower to express not only the purpose for which the building is to be used, commerce, but the character and activities of our own organization, the Fred F. French Companies. The central motif of the large panels on the north and south sides is a rising sun, progress, flanked on either side by two winged griffins, integrity and watchfulness. At either end are two beehives with golden bees, the symbols of thrift and industry. The panels on the east and west sides contain heads of Mercury, the messenger, spreading the message of the French plan.”

In discussing the entrance, shown at the left, the authors noted that, “inspired by the Ishtar Gate, the decorative program was a most literal evocation of Manhattan as the New Babylon, of the skyscraper as Nebuchadnezzar’s hanging garden in the desert.”

The slab form here has elevators at the eastern end of the tower and the rectilinear floor plan enabled the building to appear narrow or large depending on the vantage point.

While the setbacks are placed to conform with the city’s complex “sky-exposure plane” zoning requirements designed to ensure some penetration of “light and air” to lowly pedestrians, the thrust of the slender upper half of the building is very graceful and is a good argument against plazas on broad boulevards where maintaining a consistent building line and a relatively consistent mid-rise cornice line is very important.

The rather small lobby, shown below, is brightly painted in dark blue and gold and is quite regal.

Art Deco is at its best when it is not so specifically reminiscent of past styles as here, yet this is a very impressive and exotic tower that contributed significantly to the grandeur and international repute of Fifth Avenue.

Who in the World was Fred F. French?

I turned the page in Don DeLillo’s new ten-ton novel, Underworld, and right there, smack in the middle of the book, a character named Rochelle asks, “Who in the world was Fred F. French?” She is standing in the polished art-deco lobby of a Fifth Avenue skyscraper named the Fred F. French Building. I wanted to grab the shoulders of Rochelle or Don DeLillo and answer that, not only do I know who Fred F. French was but that I saw the man himself in Pawling, New York, while making house calls with my father.

The area became a historic district May 17, 1988. It comprises an area from 40th street to 43rd street between First and Second Ave.

In 1925 Fred F French – also known for the Fred F. French Buildingand Knickerbocker village – started construction of what he called ‘The largest project in Midtown’. The project was named Tudor City.

Completed in 1928, it consisted of twelve apartment buildings containing 3,000 housing units and 600 hotel rooms. The design by the architect H. Douglas Ives and his team was based heavily on the Tudor Style, an architectural style prevalent during the Tudor Dynasty. Characteristic for this style is the brickwork and the application of fine intricate stonework.

Who was the last Tudor on the throne?
Elizabeth I – the last Tudor monarch – was born at Greenwich on 7 September 1533, the daughter of Henry VIII and his second wife, Anne Boleyn. Her early life was full of uncertainties, and her chances of succeeding to the throne seemed very slight once her half-brother Edward was born in 1537.
Who took the throne after the Tudors?
After 44 years of rule, Queen Elizabeth I of England dies, and King James VI of Scotland ascends to the throne, uniting England and Scotland under a single British monarch. The daughter of King Henry VIII and Anne Boleyn, Elizabeth succeeded to the throne in 1559 upon the death of her half-sister Queen Mary.
See: A Legacy of Lies,
https://domoregooddeeds.wordpress.com/2012/12/09/a-legacy-of-lies/

[Note in trying to conduct this research. These people who are trying to prevent me from doing this research are not sane. In fact they are mentally unstable and will use any method of harassment to prevent this information from being known.
April 27. I am at the apple store, and a women went underneath the table were I a was working. This is the second time this happened at this store. April 26 yesterday at Blue Coffee across from “Grand central”  someone put a bucket of U.S. fiat notes and coins under my backside. What is going on!?]

WHAT IS THE CONNECTION?
When I went to the Tudor area, which is up on a hill from Grand Central Station, I started to remember a number of things, namely, it was the little park I use to like to take my lunch whenever I was in the area. But most noticeable was the design, location and it’s proximity to the United Nations Building, which was just below near the river.
Then i noticed the gate over looking the United Nations Building and River, looked like the wheel of a ship, with 8 spokes.
At the time i could not remember what it was called, but knew i knew it. Then later i said, HELM and knew that was what it was.
What is the Helm of a Boat or Ship?

Helm is a general term for the station from which you steer the boat or ship. It can be the binnacle, wheel station, steering console with joystick, digital station with GPS controls, or tiller (on a smaller boat.) The term “Take the helm” refers to taking direct responsibility for the control of or direction of a vessel. It has been adopted in business to refer to directing an organization.
Which brings me to the Helmsley Building. A place where I spent my summers as a young girl, as a Summer Intern for the Department of Commerce.

Beneath the Pyramids of Giza “Campbell’s Tomb”

https://m.youtube.com/watch?v=L7AIBlzCluc
Sources:
The life of Fred F French and his contribution to the development of New York City was covered in detail by Alexander Rayden in “The People’s City, A History of the Influence and Contribution of Mass Real Estate Syndication in the Development of New York City”
https://domoregooddeeds.wordpress.com/2013/12/27/beneath-the-pyramids-of-giza-campbells-tomb/

One comment on “The Fred F. French Building – The French Connection”

This site uses Akismet to reduce spam. Learn how your comment data is processed.

This entry was posted on April 26, 2018 by DoMoreGoodDeeds in Uncategorized.